The 21st century has brought diversity and variance that has never been seen in human history. The term “Global Village” is no longer just a futuristic descriptive phrase but an accurate description of the current culture.

This diversity did not skip the civil affiliation of individuals to countries either and many people have dual citizenship.

In fact, having a U.S. citizenship or any other foreign nationality for that matter is considered a big advantage that enables its holder to enjoy extensive economic options, studying options, employment, and investment options, and so on.

U.S. citizenship is no different and is considered, among foreign nationalities, to be highly desirable. Beyond the diverse employment opportunities, U.S. citizenship offers an opportunity for economic empowerment, personal well-being, and a life of happiness and wealth.

However, before you march towards the doors of the U.S. Consulate in an attempt to issue U.S. citizenship, there are a few things that are important to know – who is eligible to obtain U.S. citizenship? What is the procedure for obtaining U.S citizenship? And what rights and obligations will be imposed on you if you receive it? All this in the article below.

Who is eligible for U.S. citizenship?

Many people around the world want to possess an American citizenship, and so, over the years, the requirements needed to file a request are becoming more and more rigorous as the years go by. Currently, there are several ways to become an American citizen:

It should be noted that there is an exception to this rule – the children of foreign diplomats, even if born within the United States will not be eligible for citizenship.

Citizenship by virtue of the citizenship of parents or grandparents

Even those who are not born within U.S. borders can in certain circumstances acquire U.S. citizenship:

This child will be eligible to obtain U.S. citizenship if his parents are married, American citizens before his birth, and one of them lives in the United States for a short time before his or her birth.

This child is eligible to obtain U.S. citizenship if the American parent has lived in the United States for five years in aggregate (at least two years when the parent is over 14), prior to the birth of the child. In some cases, there are extenuating circumstances for instance when the child is born out of wedlock to an American mother.

This child can examine the possibility of transferring citizenship through one of his American grandparents. The “grandfather’s law” enables to transfer of citizenship from a grandfather to a grandson or granddaughter if the parents are American but do not meet the requirements, while one of the grandparents meets them.

That is, if the grandfather lived in the United States for five years in aggregate (at least two years over the age of 14), prior to the birth of his grandson or granddaughter.

Obtaining U.S. citizenship is also possible in the absence of an American family.  An adult (person over the age of 18) who is an American permanent resident, that is, holds a green card, can apply for naturalization after he or she spent five years in the United States as a permanent resident.

An adult who is a permanent resident will be able to apply as stated after three years from the time of receipt of permanent U.S. residencyif he is married for three years to an American citizen and stays continuously in the United States for six months before applying.

It should be noted that there are certain mitigating circumstances at the discretion of the immigration authorities.

As noted above, anyone who meets the above criteria is entitled to hold U.S. citizenship and issue a U.S. passport. Of course, it should be clarified that a U.S. visa as well as holding a green card do not entitle a U.S. citizenship but are visas that allow a temporary or permanent stay in the United States.

The conditions and ways to obtain a visa or green card are also completely different. 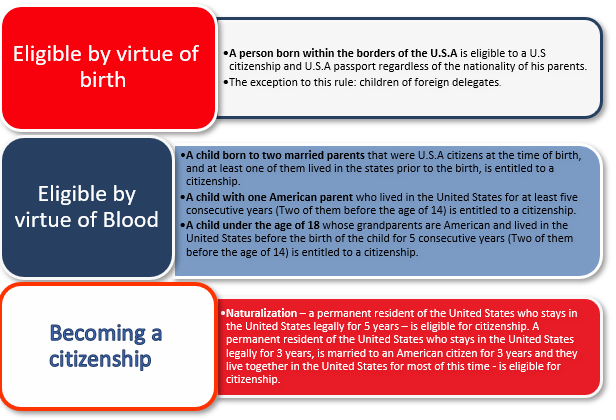 Given that in compliance with all of the above conditions, a green card holder will be able to submit a naturalization application.

The naturalization process will not end here, and after applying, the applicant will be required to meet additional conditions. First, the applicant must be a “good moral person.” This might sound a tad ambiguous, but it simply means that the applicant does not have a criminal record and has no prior convictions.

In addition, the applicant must be able to speak, read and write in English at a basic level, and must also pass a citizenship test in which they will ask questions about the history of the United States and democratic procedures in the United States.

If the applicant passes the above tests, he will be required to make a declaration of loyalty to the United States and its institutions.

Declaration of Allegiance to the United States

A developed and advanced country

U.S. citizens enjoy many individual and civil liberties and all the opportunities that citizens of advanced developed countries have.

U.S. citizens enjoy the country’s international political power and the protection of the U.S. law enforcement agencies both in and out of the United States boundaries.

U.S. citizens may live and work in any of the countries that make up the Federation and all territories under the control of the United States of America.

U.S. citizens are allowed to vote and choose the leadership of the country in a democratic manner.

U.S. citizens can enjoy economic benefits provided by the state like the Social Security allowances.

Free entry to most countries in the world

U.S. citizens enjoy free entry to most countries of the world without the need to issue a visa. Naturally, entry to the United States is also not limited.

Despite these many advantages and privileges, U.S. citizenship also holds obligations, especially tax obligations. American citizens must report annual income taxes on their global expenditures, report all foreign accounts they hold, and sometimes pay taxes on the same income.

Furthermore, U.S. citizens may be called upon to serve as jury jurors. If so, with the issuance of U.S. citizenship, these shortcomings must be considered, and measures must be taken to prevent unnecessary disclosure – especially to the tax authorities.

Is it possible to renounce U.S. citizenship?

It is possible to renounce U.S. citizenship, and thus waive the U.S. passport. The primary motive for giving up citizenship is a desire to avoid the obligations imposed on American citizens, most of them regarding taxation.

Relinquishing citizenship is done by returning the U.S. passport and making a declaration of waivers at one of the country’s embassy.

The procedure is irreversible and, despite the common perception, does not resolve the individual who gives up his citizenship from obligations he has to the United States – whether for taxation or other matters.

Many want to live the American dream and issue both citizenship and an American passport.

However, as dreams go, the way to achieve this dream is not simple and involves complicated bureaucratic procedures. Furthermore, there are things to consider before issuing citizenship as this has broad taxation implications – implications that require preliminary tax planning.

We at MasAmerica are at your disposal and we will be happy to accompany you and advise you about your tax and help you minimize or even nullify your tax liabilities.

The aforesaid should not be regarded as legal advice. It is advisable to consult with the MasAmarika team before any action. The service is provided by a professional team, fluent in English and Hebrew, and includes attorneys and accountants with American licenses.

Looking for professional tax advice?
Please Leave your details and we will get back to you.

At MasAmerica we provide professional tax filing services for Israelis that are required by law to report to the American Tax Authorities (IRS) according to American Tax laws. Our goal is to provide personal and professional service.
Our team includes accountants and lawyers who are experts in American tax issues.