For many of us the phrase “income tax” might cause feelings of discomfort and maybe even fear that stem from the complex unpleasant task of facing the tax authorities. Thus, the thought alone of the need to submit a detailed and legally binding tax report can seem like a dreadful mission for most of us.

Those things are all the truer when it comes to dealing with U.S. tax authorities: the unique taxation system, the various kinds of forms, the complexity of procedures, and strict enforcement all add to the confusion and raise the pressure. In the article below we clarify things– who must report?

Who must file a report?

The subservience to this reporting obligation is very broad. Unlike most countries in the world that require reporting according to the criteria of residency as well as the nature of the economic activity, the American taxation system is personal and does not distinguish between employees who receive a salary and self-employed.

Thus, in terms of taxes, residence within the United States does not matter: any U.S. citizen or permanent resident (holder of a green card) – even if they do not live in the United States and have never visited it, must provide the conditions listed below, in the IRS report.

In addition, even those who are not U.S. citizens or permanent residents must report to the tax authorities if they have a source of income within the United States boundaries – direct or indirect.

U.S. citizens and green-card holders may, under certain conditions, owe an additional reporting obligation – reporting foreign accounts owned by them (exclusively or jointly).

Subordination to the U.S. Taxation System

The applicability of the U.S. taxation system:

How do you report taxable income?

As we have seen, this duty applies to many different cases, and in each case, the reporting process will be executed in a different manner:

The IRS report must be filled out using form 1040. These taxpayers may also be required to file an FBAR report on foreign accounts.

Citizens of foreign countries with business activities in the United States must submit an income tax report through form 1040NR.

In the following segment, we will describe the significance of each of the above reports.

According to U.S. taxation laws, any U.S. citizen or permanent resident holding a green card that passes the annual income threshold set by law must file an income tax report.

Thus, there are different thresholds for single people (including widowers and divorcees without children), married people who report together, married couples who report separately, heads of households (individuals who support dependent people), and widowers with children in the first two years of the death of their spouse.

In general, the method facilitates (that is sets higher thresholds), on married people who report together, heads of households, widowers with children in the early years after their partner’s death, and sets better terms for people over the age of 65 and for the blind. With the rest of the people, the thresholds are lower.

The following table will show the short income thresholds, but due to the complexity of the reporting rules we recommend consulting individually with a professional:

Therefore, if the individual’s annual income exceeds these thresholds, he has a reporting obligation to the IRS. This tax report will be submitted to the IRS, using form 1040.

In addition to personal information this form includes a comprehensive income statement. The applicant must report all sources of revenue – active or passive – whether produced in the United States or abroad.

In an effort to monitor the economic activity of its citizens outside the country’s borders, the United States has imposed an additional reporting obligation on its citizens – the obligation to report foreign accounts.

Contrary to the obligation to report to the IRS – a duty that depends on meeting the income thresholds described above, this reporting obligation will arise if the following cumulative conditions are met:

1. U.S. Citizen / Green Card Holder / Company or Partnership or Independent Business established within the United States or under U.S. laws.

2. The sum of total financial accounts the same entity owns/partners or is authorized to sign on exceeds $10,000 at any point in time during that tax year.

For example, an Israeli citizen who lives in Israel and who has a green card will be required to file the FBAR report to the U.S. Treasury Department and list accounts he holds in Israel if at some point of the year the value of the accounts passed the $10,000 threshold.

The same Israeli citizen will have to submit, in parallel with the American tax authorities, an income tax report using form 1040, detailing all his income.

It should be noted that the United States has signed an information-sharing agreement with several countries, including Israel, on an information-sharing agreement, in which the Israeli Tax Authority reports to the American Tax Authority (assisted by banking corporations operating in the country), American citizens and/or those holding green cards who have accounts in Israel.

Given that the information is shared, reporting inaccurately, or failing to report – may result in severe sanctions. 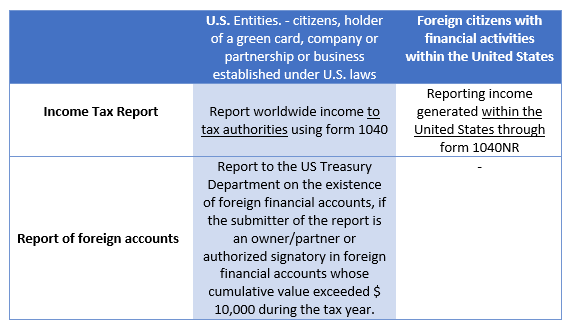 When should the report be filed?

Individuals who are not U.S. citizens but who have financial activity within the United States will submit their income tax report through form 1040NR by the 15 of July.

Companies will file the report by the 15 of March or if given a special extension until the 15 of October.

Filing reports of the existence of foreign accounts under FBAR is synchronized to file the tax reports, so it must be submitted by 15.4, and given a special extension until 15.10.

Submitting reports on the existence of foreign accounts under FBAR is synchronized with the submission of tax returns, so it must be submitted by the 15 of April and given a special extension until the 15 of October. 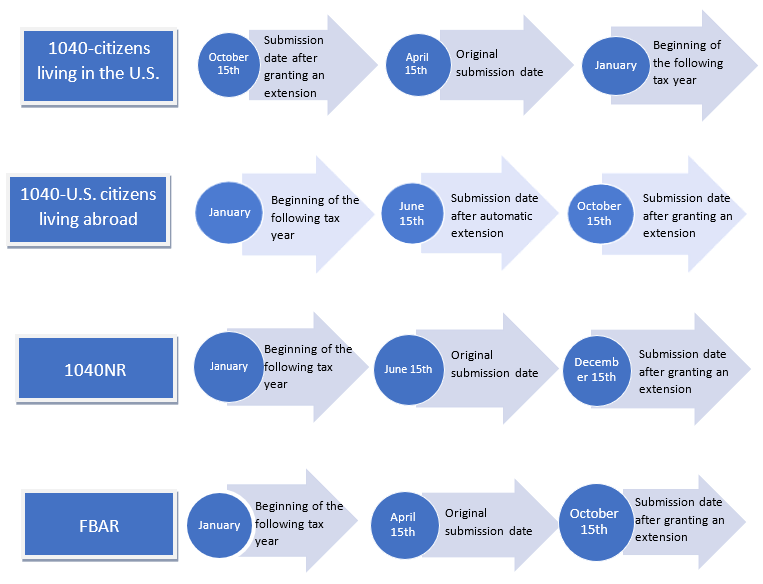 Does reporting in the United States mean paying double on taxes?

First, in light of the fact that the taxation method includes a developed system of deductions and credits, it is not certain that there will be a tax liability. Thus, there is a standard deduction system and an individual deduction system that addresses specific circumstances.

When filling out the forms those deductions will be addressed.

Second, in order to avoid a situation in which taxpayers would be charged full income tax for the same income in two different countries, the State of Israel has signed a double tax treaty with the United States.

As the tax paid is higher than the tax in the other country, the taxpayer will be able to receive an excess tax credit which can be carried back one year and up to ten years ahead.

Who can expect a tax refund?

Thus, it is possible, for example, that an Israeli citizen with additional U.S. citizenship will be owed a report to the IRS and the Treasury Department, and even though he will not be charged income taxes, he will be entitled to receive a tax credit for his children.

Thus, it is possible, for example, that an Israeli citizen with an additional American citizenship will be required to submit a report to the IRS and to the Ministry of Finance. In this case, might do not owe income tax but is entitled to a tax credit for his children.

U.S. citizens whose children also hold U.S. citizenship may be eligible for a tax refund of up to $1,000 a year per child, depending on their income level.

American citizens can receive a tax refund of up to $1,000 a year for undergraduate expenses at a recognized academic institution, all depending on their age and income level.

American citizens who have lived for the past six months in the United States are eligible under certain conditions and, depending on their income, to receive a tax refund for low incomes.

What are the consequences of failing to report?

In order to ensure the accuracy of the reported information to the tax authorities and the full and timely payment of tax fees, the United States government has imposed heavy sanctions for those who fail to report.

The annual interest rate on unpaid tax is about 6%. Furthermore, failure to file the report on time carries fines of up to 25% of the tax rate. Inaccuracy in the reporting also entails a fine, at a rate of about 20% of the tax liability.

In addition, not paying income tax on time also entails approximately 0.5% of the original tax liability. The accumulative amount of these fines can reach large amounts. Those who owe significant amounts of money risk revocation of their U.S. passport.

The lack of FBAR reporting to the U.S. Treasury Department also leads to heavy fines and penalties – up to $10,000 per account.

It should be noted that if a U.S. citizen did not report because there was no deadline, he or she could not resolve the lack of reporting through the use of a voluntary disclosure procedure.

The tax reporting obligation in the United States is extremely extensive. It applies to both American citizens who do not live on its territory, and to foreign nationals who generate income on its territory.

The reporting rules are strict and complicated, and the sanctions that apply for non-compliance are quite severe. However, knowing the rules may simplify the process, and even yield profits.

Wondering whether you should report? Finding it difficult to fill out the forms? Want to check if you are eligible for tax credits? Our experienced and professional staff will be happy to be at your service.

The aforesaid should not be regarded as legal advice. It is advisable to consult with the MasAmarika team before any action. The service is provided by a professional team, fluent in English and Hebrew, and includes attorneys and accountants with American licenses.

Looking for professional tax advice?
Please Leave your details and we will get back to you.

At MasAmerica we provide professional tax filing services for Israelis that are required by law to report to the American Tax Authorities (IRS) according to American Tax laws. Our goal is to provide personal and professional service.
Our team includes accountants and lawyers who are experts in American tax issues.